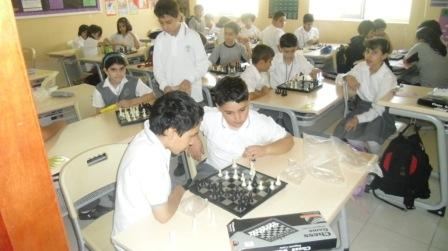 Chess is a two-player board game played on a checkerboard with 64 squares arranged on an eight-by-eight grid. The game pieces are divided into white and black sets, each of sixteen pieces that consist of one king, one queen, two rooks, two bishops, two knights, and eight pawns. The person playing with the white set typically begins the game.

Chess is a game with a long history that is rooted in China. The game quickly spread across the globe and the first person named the official world chess champion was Wilhelm Steinitz of Austria who claimed the title in 1886. The current world champion is Viswanathan Anand from India.

In 1997, the computer program DEEP BLUE was the first machine player to overcome a reigning world chess champion when it defeated Garry Kasparov.

The games pieces per player include eight pawns, two rooks, two knights, two bishops, one king, and one queen.

Every game piece has a specific way that it can move, pass or to take an opponent’s piece.

Try it and you will not Regret

This year, at ISC-Suleimaniah school, we have a Chess Club organized by Mr. Mohamad Solaiman, the Math Subject Coordinator.

Written by: Grade 6B students